Are we sitting on a mental health time bomb?

Like many Malaysians, I have a great fascination for the macabre and morbid, and strongly believe that the Western paranormal has nothing on ours. Our pontianaks, langsuirs, toyols and black magic can obliterate vampires, demons and all. All these have inadvertently made the Malays who they were before religion took hold of them.
Link to Story

When will being Malay no longer be the topic du jour?

I may enjoy researching about Muslims and Malays in Malaysia, but I felt quite drained after attending a few too many gatherings to discuss about Malays/Muslims in all aspects. Last week, I was privileged to have attended a closed-door roundtable on Malay leadership, attended by corporate luminaries and public intellectuals.
Link to Story

Last year, I was introduced to the writer Yap Lim Seng, who wrote "The Chinese Dilemma". He wanted an editor-writer for his next book, but the project halted halfway. I contacted him many times to plead and beg that he continue, but he kept saying he was tired and old, and what more could he say when the Malaysia he knew no longer existed?
Link to Story

I wasn’t expecting such a hullaballoo from the articles I wrote a few weeks ago. Perhaps I should have captured the zeitgeist in a more sedate manner. But there is one thing that we must do: we need to talk about us. My interactions with fellow Malaysians these days can be rather intense and combative experiences – I am a great believer, no matter how offensive one’s rationale is, that you are entitled to your opinion and beliefs.
Link to Story

Why we need to address the Bumiputera economy

Some time last month, Majlis Tindakan Ekonomi Melayu (MTEM) released their report on the socio-economic status of the Malays. I chose to study MTEM’s study because for one, its members are Malay entrepreneurs and NGOs who face real-life issues of entrepreneurship and income-expenses. (No less important is the Khazanah Research Institute’s The State of Households 2014 Study.
Link to Story

Things can get busy on weekday mornings at the guardhouse outside the regal building of the Malaysian High Commission in Singapore at Jervois Road, as a string of Malaysians come to renew their passports, announce their permanent resident (PR) status and renounce their Malaysian citizenship. Between 30 and 50 applications to renounce Malaysian citizenship are received a day in Singapore, dropped off in a special box for documents of this nature, one of the guards on duty told The Malaysian Insider there recently.
Link to Story

Unappreciated in my own country

I never thought I would say this but when I arrived home from Singapore, and had a long drawn out battle with baggage delays at KLIA, and then touts at KL Sentral, I looked up to the dark evening sky and thought how Malaysia had become a third world country. As I stood there with my bags, observing fellow Malaysians shouting at the touts, while the security guards looked away, and then seeing a poor, hapless foreign porter being heckled by a lazy plonker of a Malaysian, I said to myself, there has to be a better way of living and to live.
Link to Story

Dina Zaman writes to find answers. Sometimes she doesn't. If she's not spending too much money on books, it's household items. She would like everyone to be happy. FEBRUARY 14 ― Whenever I tell people about my grandmother’s neighbour, the many-times married Mariam (13 husbands!) , the response is typical and ranges from laughter, judgement and bewilderment.
Link to Story

It’s all about the money

Dina Zaman writes to find answers. Sometimes she doesn't. If she's not spending too much money on books, it's household items. She would like everyone to be happy. On Sunday, January 25, 2015, residents living in Kampung Keramat demonstrated against the Datum Jelatek luxury condominiums. “Fearing their Malay-majority city neighbourhood may soon be overrun by Chinese, a group of residents in Taman Keramat marched to the construction site of upscale condominium project Datum Jelatek here and violently tore down its cladding today.”.
Link to Story

I don’t mind, but they are not mine!

Dina Zaman writes to find answers. Sometimes she doesn't. If she's not spending too much money on books, it's household items. She would like everyone to be happy. JANUARY 23 ― In the year 2005, from December 15 to 18, the Asia Europe Institute of Universiti Malaya conducted a survey on over 1,000 randomly chosen Malaysian Muslims in Peninsular Malaysia.
Link to Story

Dina Zaman writes to find answers. Sometimes she doesn't. If she's not spending too much money on books, it's household items. She would like everyone to be happy. I was one of the many Malay-Muslims who signed the online petition, #iam26. Like my fellow Malaysians, I am tired of the malice, bigotry and hatred that I see in the media and in so-called polite conversations.
Link to Story

My first encounter with one dog was when I was very young, and it was a wolfhound owned by my aunt and her Italian husband, and his name was Arturo. They visited us in our apartment in Moscow, and while my mother screamed blue murder, my father and I were delighted by this happy bundle of fur. The second dog I encountered was Krocka, owned by the very same couple, and it was a Doberman whose idea of fun was chasing all of us very aggressively around the garden, when we visited them in Italy.
Link to Story
View More Stories

Dina Zaman has been writing for the Malaysian media as a columnist for 20 years. She started writing about the single life in the 90s, and it was during her tenure at Malaysiakini.com that saw her find her niche: Muslim life in Malaysia.

She is an award-winning writer of non-fiction, fiction and poetry. She has a media presence locally and abroad as a columnist since 1994 and commentator of current affairs since 2005. Her bylines and editorial contributions appear regularly in well-read media outlets including The Malay Mail Online, The Malaysian Insider, The Star, to name a few. She has appeared on the BBC and been interviewed on Everywoman, a women’s programme on Al Jazeera. She wrote I Am Muslim (www.malaysiakini.com, 2005 to 2006), which is now a book published by Silverfish Books, and her latest book, King of The Sea, was longlisted for the Frank O’Connor Short Story Award.

She was also a Senior Asian Public Intellectual Fellow (2012 to 2013) and a British High Commissioner Chevening Award Scholar (1999). 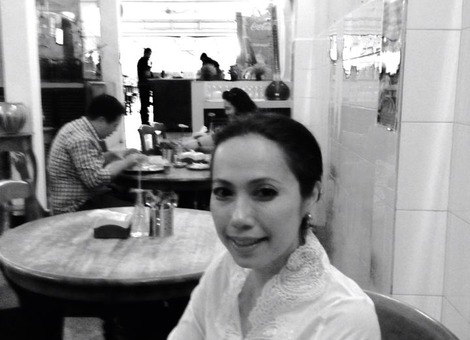